We provide positive shared experiences for agricultural, artistic, educational, and leisure activities to enhance the quality of life, culturally and economically, throughout the Midwest.

The National Cattle Congress organization provides year-round events and activities for the Cedar Valley, surrounding communities and states.  Along with providing excellent facilities for private events such as weddings, school proms, workplace celebrations, and fundraising events, we offer many events that provides community evolvement, education, culture diversity, and opportunities for families to enjoy time together with many of these events offered at no or very little cost.  These events include equestrian shows of all types, livestock shows, concerts, motor sport events and more. The National Cattle Congress is also home to the Sunrise Children’s Zoo, and the Black Hawk County 4H Fair.

Our biggest annual event is the National Cattle Congress Fair.  Our fair provides patrons with a wonderful mix of entertainment, education, and experience with livestock and agriculture.  Our livestock events invite youth from all over the state an opportunity to win scholarships for continuing education and our Program Discovery provides over 2800 school-age children with hands-on opportunities to learn about farming and agriculture and how Iowa’s rich history has made an impact on today’s economy.  In 2017 the National Cattle Congress fair was awarded the Blue Ribbon by the Association of Iowa Fairs.  This award recognizes fairs across Iowa that promotes services to youth programs and provides distinguished services to the community. 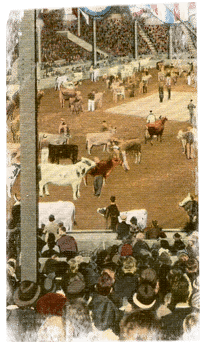 The first Dairy Cattle Congress opened at Waterloo on October 10, 1910. The responsibility for the success or failure of the show rested largely upon the shoulders of Hugh G. Van Pelt, general manager of the first five Dairy Cattle Congresses. Both local and out-of-town manufacturers were urged to exhibit their products. Breeders and dairymen from far and near were importuned to enter their stock. Van Pelt history-03himself went to the Illinois State Fair at Springfield and secured “A special train which brought 13 carloads of the choicest cattle” directly to the Waterloo show.

The first dairy show was at Chautauqua Park, a “beautifully located” spot in a “very pretty bit of timber” on the east bank of the Cedar River. The central building of the show was the Coliseum, a large circular building 160 feet in diameter and of steel construction. It was said to be “the biggest building in Iowa without a post.” “Big as it is,” declared Wallaces’ Farmer, “it was crowded to its utmost capacity, with some 300 Holsteins, Jerseys, Guernseys and Ayrshires, as well as with a great variety of dairy machinery.”

Since the inaugural event was not a corporate entity, it was doubtful whether Waterloo would secure the 1911 meeting of the Iowa State Dairy Association. When officers met in the spring of 1911, they had practically decided to hold the convention in Des Moines. Harry E. Kiester made a bid single-handed and convinced them that Waterloo was the best place in the state for them to meet. Waterloo businessmen offered to assume “all responsibility” for both the convention and the show. Finally, Waterloo put up from $6,000 to $8,000 in cash prizes for dairy cattle and butter. The prize money was said to be the largest amount ever offered in the United States for a similar event.

history-02Small wonder that the Iowa State Dairy Association promptly accepted Waterloo’s generous offer. At the close of the 1911 exposition, the association adopted resolutions endorsing the “second Iowa dairy cattle show” and heartily recommended that it be “continued in the future.”

In August of 1913, “The Dairy Cattle Congress” was incorporated as an independent organization “to conduct expositions, fairs, shows, entertainments and displays; to promote dairy and agricultural interests in general; and to carry on such other business” as might be determined by a board of directors consisting of nine stockholders elected annually. 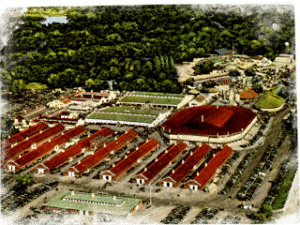 Enthusiasm ran so high during the 1911 meeting that the Waterloo Courier could see “no harm in trying” to take the National Dairy Show from Chicago. In 1912, the Dairy Cattle Congress moved from Chautauqua Park to its present grounds. In each succeeding year, the size and history-01quality of the dairy exposition seemed to improve. James Wilson, former Secretary of Agriculture, declared to the dairymen attending the sixth cattle congress in 1915 that in all his long experience he had never “seen as many fine dairy cattle brought together as you have on these grounds today.”

Other eventful years included 1925 when a windstorm destroyed three original wooden barns shortly before the 1925 show. The John G. Miller Construction Company rallied all stone masons, bricklayers and carpenters in town and within one week, the wreckage was replaced with the brick barns still standing today.

In 1927, the show was rained out. During the early 30’s the Cattle Congress fell under the blows of the Great Depression. During 1937, the Industrial Exhibition Building was destroyed by fire. In 1942, the Iowa State Fair and other local fairs were canceled for the duration of World War II. In 1943, 1944 and 1945, the Cattle Congress “kept alive” by providing a home for the Iowa State 4-H Dairy Club Show. Following the war, the Cattle Congress entered the greatest seven-year period in its history. Profits twice as large as its prior best years stimulated another building program. 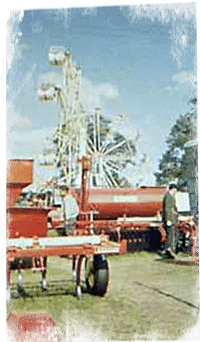 Maurice Telleen, past manager of the Waterloo show, stated that the National Dairy Cattle Congress was not “National” anymore, but regional. There are several reasons for this change: shipping cattle for long distances by rail had become economically prohibitive and, in the days of curtailed rail service, geographically impossible. The Dairy Cattle Congress became a regional “wind-up” show usually held history-04in late September, after the state fairs were over. Exhibitors look upon the Waterloo show as an opportunity to have their local champions compared with other local champions.

Whatever memories of this annual event stir within all of us, one thing is clear; The National Cattle Congress will continue to bring the best in agriculture, livestock, entertainment and education to all of Iowa and the Midwest.